Better late than never. I Came back last week from my second LindzonPalooza, a yearly event setup by the lovely and crazy Howard Lindzon, founder and CEO of Stocktwits, Hedge/Startup fund Social leverage and off course a beloved advisor and investor in eToro.
What is LindzonPalooza ? Its a 2 day hangout in San Diego with Howard’s friends, entrepreneurs, angel investors, venture capitalists and Stan Feld (Great overview of the event), and this year there was also a Demo of about 10 companies each presenting their cool startups (including myself presenting eToro), you can read about all the start ups here.

So you get 75 TechCrunch people, in serenity, just giving them time to think and talk about stuff they like and learn, for example Ethans Austin 10 things he learned in LindzonPalooza, so here are mine :

1. Since I am copying him, I’ll also give some credit first, Ethan is running GiveForward, an amazing startup which is basically crowdfunding for medical expense, the website enables people with medical difficulties to raise money for medical expenses and it has some amazing success stories of helping people in need. It seems the healthcare system in the US is in trouble, with people paying 25K a year in healthcare insurance (Stan is talking about that in his blog). I’m Inspired by giveforward ability to fix the health care system and disrupt the insurance industry by creating a social insurance network .

2. I had an inspiring discussion on lead generation with TJ Clark on Limos.com, a website for people looking to book limos (Dah..read TechCrunch on it), made me realize the importance a good and simple SEO Strategy – simply build actionable content pages across users needs (i.e – NYC airport limo), and amplify it with media. (a really really good domain like Limos.com also helps) .

3. Had a great talk with Barry Ritholtz, hedge fund + blog writer, he gave me (I’m a beginner blogger) great tips : Blog every day, several times a day, write several blog posts when you have time and schedule them to appear spread across the day, use graphics, link to other blogs, write about interesting stuff you see over the net. Thanks Barry.

4. On my way from NYC to San Diego, I came across Alan Baldachin, Howard trusted Lawyer and friends, and we sat together and discussed the new Jobs Act and Crowdfunding. Main impact of the Jobs act are 1) Lower barrier for new IPO’s, by lowering SOX requirements for young companies, and you can start a roadshow without publishing an S1. 2) CrowdFunding, enabling business to raise money online (like Kickstarter etc’) – this was not possible due to regulatory constraints. 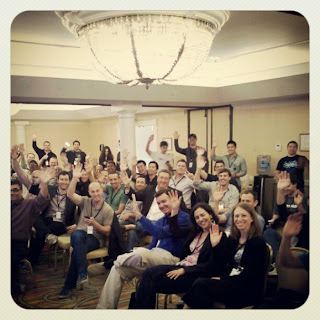 5. We got a free lesson on how to go Viral from the Viral king, Brad Feld, and his father Stan Feld. Brad simply asked a room with 70 Internet geeks to share Stan Feld new instagram photo, the rest is history

6. Had a really funny discussion with a new breed of young Investors, Ryan and Brandon from Venture51 who are invested in eToro,  Peter Pham (West Coast Peter Pen), Agosha , and learned that you don’t want to mess with these guys, and you want to get invited skiing with them (and Justin Timberlake), and party and SXSW.

7. Tried to do some business with Jason Raznick, BenZinga founder, hopefully we will work it out, learned a bit about Forex.com advertising.

8. Daniel Ha from Disquss has some mind boggling scale, and the sheer size of the numbers on disquss are WOW. I hope he will let eToro sponsor discussions, we would love to sponsor great financial commentators.

9. Some people are just Totally.Awe.sm, by that I really owe the founder of Awe.sm, Johnathna Strauss for his help after I missed my flight, I enjoyed dinner so much, I missed my flight, and he simply helped me find another ticket on his Ipad. We are also now a customer of totally.awe.sm so we can track our sharing, so its worth helping people 🙂

10. If knowledge of US politics was mainly coming from sitcoms, I increased it significantly after lunch hangout with WitStream founder , Lisa Cohen,   (Witstream is funny twitter – curated comedy stream).She helped me understand better US Politics and also explained that why  you can’t talk about it in the US and reminded me why I need go to Comedy clubs more often.

11. Phil promised me to join the StockTwits blog network

12. The Swan brothers from TD Ameritrade are very big Guys (like 6 feet tall), and Howard told a funny story that first time he met them, one of them had a black eye and he was like – “who gets a black eye these days”, apparently if you are 2 BIG guys in a bar, you get picked into bar fights. Scary.

13. Came up with the concept of the Social Credit Network (patent pending)

Wow, seems like I can go on and on, So I’ll simply stop (sorry for both name dropping and dropping out anyone) at that and quote “hanging with Howard Lindzon is the closest I’ll ever be to hanging with Larry David” (not sure who I’m quoting here)