I just saw a great movie about Anonymous (its version on youtube). The film is available on Youtube for free, but I chose to pay and download it from the movie’s official website, which also includes reviews Huffington Post, New York Times, Wired and more. 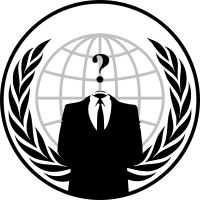 This is what Wikipedia has to say about Anonymous:

Anonymous (used as a mass noun) is a loosely associated hacktivist group. It (is estimated to have) originated in 2003 on the imageboard 4chan, representing the concept of many online and offline community users simultaneously existing as an anarchic, digitized global brain.[4] It is also generally considered to be a blanket term for members of certain Internet subcultures, a way to refer to the actions of people in an environment where their actual identities are not known.[5] It strongly opposes Internet censorship and surveillance, and has hacked various government websites. It has also targeted major security corporations. Its members can be distinguished in public by the wearing of stylised Guy Fawkes masks.

I believe in the free Internet, and strongly oppose Internet censorship, and therefore relate to what people do to promote these concepts. I believe Anonymous and bitcoin are a part of the coming revolution which I described in an earlier post as the Internet Revolution.

Since Anonymous is only “loosely associated”, just like bitcoin, no one can really support everything ‘they’ stand for.
There are actions taken by the group that I object to, but seeing as their position are only defined by members’ actions which can change every day, you can only relate to their cause.

So here is What I learned from the movie

Chan4.org B Board was the basis for the Anonymous group, and is considered the place where a lot of the internet memes (or all of them) are born.

Anonymous declared war on Scientology with their Message to Scientology.

There is no doubt we are entering a brave new world, where loosely defined and distributed communities can form and potentially be as powerful as governments. I hope and believe they will bring more freedom and free the internet and finance. The movie is undoubtedly worth a view.